Copper for the control of downy mildew of the grapevine: alternatives to reduce its use

Reducing the use of copper as a fungicide for grapevines has become one of the great challenges for European vine-growers. The tightening of EU legislation and, in particular, the adverse effects of the build-up of this heavy metal in soil, leads to the need to search for alternatives to its use for combating diseases such as mildew, especially in organic agriculture.

A trial conducted by Seipasa in Italy, one of Europe's countries with the highest levels of copper pollution, has demonstrated the efficacy of Septum for controlling  downy mildew of the grapevine, with a very notable reduction in the quantity of copper used, as part of the strategy to combat this disease.

In spite of the fact that the use of copper dates back to the 19th century, today it is highly questioned due to its toxicity for microorganisms and its negative effects on soil biology.

Just under two years ago the EU marked a new direction, approving the extension of authorisation for the use of copper to treat downy mildew in organic vine-growing until 2026. However, it set new annual limits of 4 kilos per hectare, and a maximum application rate of copper of no more than 28 kilos/hectare over a seven year period.

Copper for downy mildew of the grapevine

The European Commission has included copper as one of the candidate substances for substitution; the tightening of regulations is accompanied by restrictions for the renewal of various products with copper-based formulations.

The problem is that the new application rates for copper established by Brussels may be insufficient in years when there is a high incidence of downy mildew, and this means that alternatives must be sought to control the disease effectively and to optimise phytosanitary treatments without them affecting the organoleptic qualities of grapes.

One such alternative is Septum, a natural solution with  fungicidal action developed by Seipasa from Equisetum arvense extract that provides a high degree of efficacy for controlling downy mildew of the grapevine. This is shown in the results obtained in the trial carried out by the company on vines of the Trebbiano Romagnolo white grape variety in the Emilia-Romagna region of Italy.

The trial compared 3 strategies for treating downy mildew of the grapevine. The first is the conventional strategy normally applied in this region, which includes active ingredients such as Mancozeb, Dimethomorph, Metalaxyl-m, Cymoxanil and Copper. Some of these substances are candidates for substitution while others are no longer authorised by the European Commission, as is the case of Mancozeb which was, however, still in force at the time the trial was conducted.

As the results of graph 1 show, the mixed strategies with Septum, with 3 and 5 applications, equalled or even surpassed the % of efficacy against downy mildew of the grapevine of the conventional strategy. The control effect, both on leaves and bunches, is similar, showing that Septum is totally capable of forming part of integrated protection programmes, obtaining very positive results in terms of the efficacy achieved. 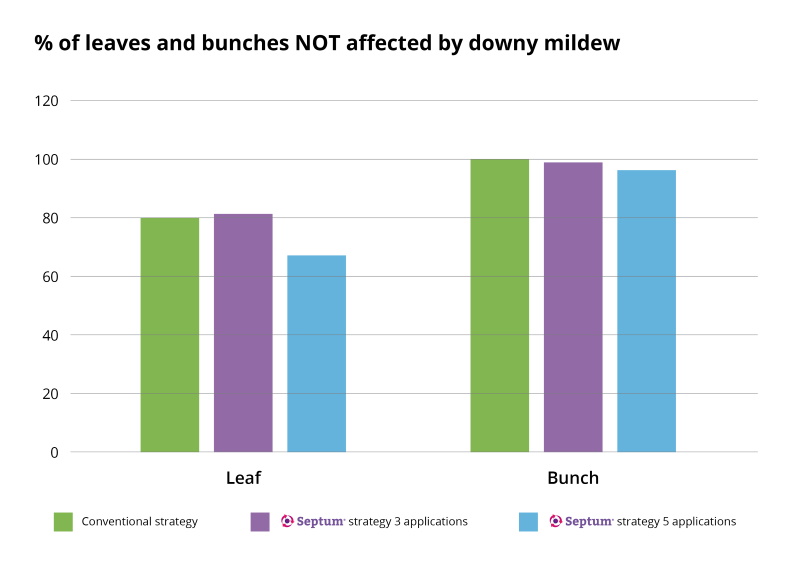 Graph 1:  % of leaves and bunches NOT affected by downy mildew.

In addition to disease control efficacy, the results show a considerable overall reduction in the quantity of the chemically synthesised active ingredient (g/ha) applied:

As Jordi Asamar of Seipasa's Technical Department points out, the trial results are enormously positive as they show that there is now a real alternative to the use of copper for the control of downy mildew of the grapevine.

"The trial demonstrates the high level of efficacy of Septum for improving the health of grapevines by dealing with one of vine-growers' biggest headaches. The strategy ratifies that a reduction of chemical load and of use of copper in these treatments did not result in any loss of efficacy in controlling the disease. This highlights the real possibility of  being able to combat the disease with guaranteed effectiveness, by clearly alternating active ingredients, allowing  doses of  phytosanitary treatments to be reduced", Mr Asamar added.

In this respect, Table 1 presents the details of the rotation of active substances in the strategies used in the trial. It shows that applications of Septum replaced both copper-based treatments and treatments with chemically synthesised active ingredients. 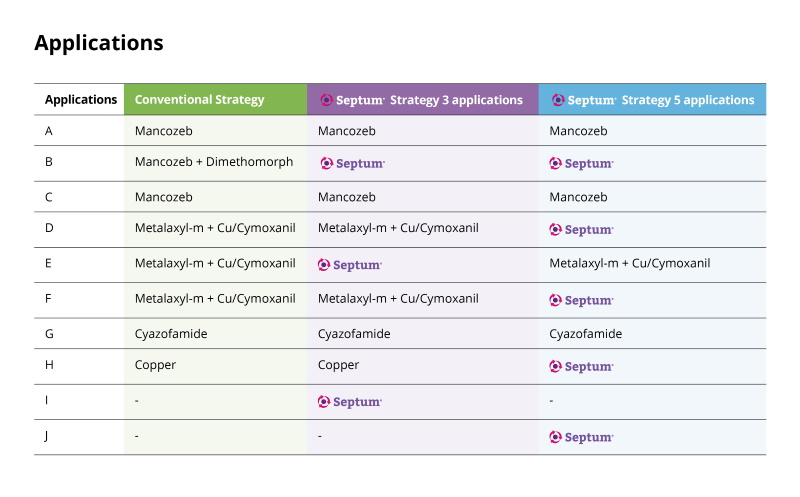 In addition to its efficacy in controlling the disease, the results of the trial also show that applying Septum does not affect the organoleptic qualities of grapes (see graph 2).

Septum is a natural solution with a fungicidal action developed using a powerful combination of different active molecules (phenols, saponins, flavonoids and silicic acid) obtained from Equisetum arvense extract which, once isolated, and in a balanced proportion, afford the product extremely high efficacy.

Septum is effective from early crop development stages, due to its preventive and curative effect. It causes the breakdown and dehydration of fungal tissues and interrupts sporulation of fungi.

Seipasa has developed extensive in-house knowledge of the product thanks a research project with the Centre for Plant Biotechnology and Genomics of the Polytechnic University of Madrid which has succeeded in producing a descriptive map, identifying the more than 90 botanical molecules that make it up.