How to achieve zero residues crops in conventional agriculture

Towards Zero Residues in traditional agriculture

Any conventional agricultural production -thus not restricted to organic agriculture- can get fruit, vegetables and grains free of chemical residues, Zero Residues. How? We will explain.

To be clear about this process, we should talk about the so-called degradation curves or waste disposal curves. Which are the graphical representation of the evolution over time of residues present in plants treated with pesticides.

The application of pesticides generates a deposit (amount of the substance that remains in the plant immediately after treatment), which depends on the product used, its formulation, the presence of adjuvants, of the application, the vegetable’s morphology, of the weight-surface ratio of and of weather conditions at the time of application.

Since the initial deposit, occurs a progressive degradation of the pesticide by mechanical, physical and chemical agents, derived from climatic factors (temperature, wind, rain, humidity, sunshine) and the nature of the plant and the pesticide.

This process may be foreseen according to models that set the rate of heat loss, setting curves that let us learn theoretical concentrations for a particular application time. 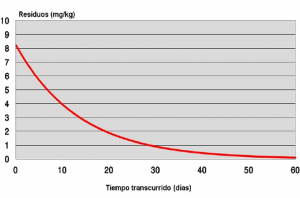 for each crop allow us to know how the residues content changes over time in the fruit and, thus, determines the “safety periods” (minimum period of time that must elapse between treatment and harvesting the product, or the entry of cattle in the treated plot).

The danger of a residue is determined by the toxicity of its active material, the characteristics of the formulation, the potential metabolites generated by the degradation process itself, its bioaccumulation, the amount of residues in the collection or consumption, and the degree of exposition.

In order to protect public health against the toxicity of chemical residues in agricultural products, they are regulated by the Maximum Residue Limits (MRLs) rules.

This is the maximum amount of chemical residues that plant products may contain when they reach the market; that is, the allowed concentration acceptable for long term human or  animal consumption.

In conventional agriculture, following the best practices implies crops that do not exceed those Maximum Residue Limits if the legally established criteria (dose, timing, adjustment of product-cultivation...) is respected.

The curve process is as follows: There is a brief latency period, after which a progressive decrease in the residues concentration (dissipation area) is reported. This comes to a point where degradation occurs more slowly (persistence zone) until reaching the harvest period, in which the parameters of the Maximum Residue Limits (MRLs) must be met.

Also, it must be kept in mind that in many cases several applications of a pesticide are necessary at different times of the production cycle, which causes the degradation curve to move to the right. This way, the closer the harvesting time, the more residues will reach the final production.

But, in addition to this method, the practice leads to focus on another highly effective and even more natural formulation: planning each crop following the Integrated Pest Management (IPM) strategy with the added goal of a 'zero residues' crop.

Thus, it is established as the main performance in pest control prioritization mechanisms of natural regulation as the use of biological control and the use of plant protection products compatible with biological control organisms (OCB) are like SEIPASA biopesticides, of so that free crop residues is guaranteed from the beginning.

This ensures fruits, vegetables and cereals without toxic remains reach the population tables, not even legally permitted levels.

All of this adds value to the agricultural product, both in quality (nutritional, sensory and visual) and nutritional health, which more and more consumers ask for, along with large retail chains. Moreover, major retail outlets are no longer satisfied only with respect to Maximum Residue Limits, they ask for much lower levels.

The great effectiveness of SEIPASA biopesticides can keep pests at bay while protecting the crop in a more natural, sustainable and healthy way, but also avoids the harmful effects caused by chemical pesticides such as some plants’ sensitivity to pests or diseases or some pests’ resistance to pesticides, which make them not only useless but also contaminants.

It must be kept in mind, as discussed before, that synthetic products can be replaced entirely by SEIPASA’s natural treatments from the cycle start, achieving the same effectiveness. SEIPASA biopesticides are a major element in Integrated Pest Management (IPM).

For more information on the most appropriate biopesticide for each crop and production cycle, and o application times in order to achieve a 'zero residues' harvest:  consulta@seipasa.com